Do y’all eq like this pic illustrates?
Is it ok to do that?
Is it better to subtract from 0db as opposed to adding?
Going above 0db? 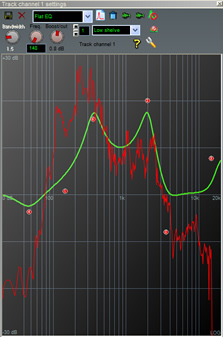 If you’re trying to make something fit in a mix, you’re better off “subtracting” from the other competing signals to make room for it.

i don’t know that i ever eq quite like that. however, i always screw it up. really, it all depends on how your source signal sounds, therefore how it should be tweaked (or in that case, overhauled).

I add to zero as well as subtract from it. I have no problem adding a bunch of punch to the bass, especially after the compression and edge i put on it which tends to thin the eq.

for vocals, for example, it’s much easier to a a little 10kHz sparkle than to try to reduce everything else just right.

hope i confused you enough, L

No not confused just curious about what everyone else is doing. You should see my master vu controller after I've mixed and mixed.
It can be all the way down to the point of using the auto volume effect to being it back up a little. Weird how that happens.
Because I have the faders on all the traks maxed, I seem to like red.

But like Kevin, I do minus 0db eqing too.
Just checking for a golden rule

Why do “they” always say cut rather than boost? I understand why a big “Q” is usually better than a narrow one, unless something special is going on. But some EQs sort of ask to be boosted, don’t they? I only have two hardware EQs, and symmetrix which is pretty much cleam, and a UREI 535, which really isn’t. It’s likes boosting.

“Cut instead of boost” is because boost brings up background noise and cut pushes down background noise. It made a lot more difference when dealing with broadband tape hiss that might be only a few db below the signal you’re trying to bring out. The other reason is that it’s hard to bring out frequencies that aren’t there in the first place, while it’s easy to attenuate what is there. If you find a consistent need to boost it would be better to change the micing or tone so the boost wasn’t needed.

Levi, what were you putting that EQ on, anyway?

Does it sound right? Then it is right.

That’s one hellacious EQ Levi. Looks like what PW needs to give his monster ‘LIFE’.