Just remember your journeying to the center of the world, heck the universe…
Well that’s how most of it’s residents see it.

I’ve been to the centre of the universe, heck, I’m there now.

But, it ain’t all it’s cracked up to be.

See, the thing about an expanding universe, is that…it’s expanding.

Sure, lot’s of “bye-bye” waves and smiles slowly segueing into a maroon nothingness, but, it ain’t really all that comforting. (Is that why it’s called “maroon”?

Anyway, red-shift, as fascinating as it might sound, really ain’t any more entertaining than you might imagine. So now there’s just me, and HIM, left here all on our own.

And you really can’t imagine how boring the conversation is.

"Yeah, fruit flies! Yeah, I took a lot of time over them. Did you know that the scale distribution on a fruit fly’s wing is exactly proportional to the first 19 prime numbers? And did you realise that…"

Anyway, here I am. Here I remain, and looking forward to the Big Crunch.

And, before you ask, yes, I’ve already figured out who I intend to catch first!

Actually I find fruit flies quiet facinating, despite their proportions.

There was a study done a while back where they put one set of flies in a room with a heavy wind, and another in a still room.
Don’t really know what the control groups rooms was…but anyway.

You’d think the ones with the fresh air flow would have lived longer than the ones in the stagnet re-inhalation of their own breath.
But no.
Apparently “according to the study” the ones who had to fight the constant air flow to do their day to day routines used up more heart beats faster.
The summation of the study was that fruit flies only have so many beats per measure (musicians joke) and when their number is up, they check out, and take the big dirt nap.

They did try and draw a correlation between this data and humans, but I don’t beleive we came from flies, that would be evolution…so that was it for me on that study.

Anywho I do wonder what would have been learned had I stayed on…
Just how many heart beats do I have left?
Am I in the stagnet room? or the one with air flow? (stress wise I’d say the calm one)
But earlier in my life, definitly the room with the wind, for there was alot of resistance and goin’ against the wind in my youth, wonder how many heart beats that used up?
I do feel a Bob Seger song comin’ on…

Run little fruity fly run…you only got so many beats left…but run!

BTW ‘A’ what are going to do for an oncore?
I mean wouldn’t you look silly as the artist formerly known as A ?
Kinda starting at the end of our musical evolution aren’t we?
I mean where could you possibly go from there?
Unless your a hoser A?

So Ian, you are a Brit living in the UAE working for an American company ? Indeed a true world citizen !


So Ian, you are a Brit living in the UAE working for an American company ? Indeed a true world citizen !

W.
But, as Tom correctly identified that I was born in Alpha Centauri, I think I can claim inter-galactic status.

But actually, growing up with a British mentality, and trying to apply American business philosophy in an Arabic culture is an interesting juggling act to say the least.

Btw Wihan, my boss is coming to Dubai next week on his way to South Africa. If you see him over there in SA, tell him I need a raise

Been there on the A.Centauri hyper space shuttle. Got the fridge magnet and T-shirt

Actually, I went to the States with some pre-conceptions and found more diversity of opinion than I expected. So at least the trip opened my eyes a little.

Ok, the hillbilly driving our bus from Cranston R.I. was surely married to his sister and had a kid with 2 heads and one leg...but he sure was a nice fellar!!

And in spite of having 30 pages of Middle East stamps in my passport and an issue date of 9th Sept 2001, I didn't have to grab my ankles and brace myself at the airport. ( Guess I didn't need the KY jelly after all)

Give him directions to my house : As you enter South Africa, the 2nd street to the right.

So how did the transition from the Alpha Centauri’s culture to earth go ?
Or were you just born there and can’t remember ?

Easier than the transition from Dubai to New York

Actually I was born in Caithness in the North of Scotland which is culturally, more far removed than The Big AC (as us Centaurans call it)
TomS January 17, 2007, 4:56pm #29

A very wise person once said:

I don't know if it's good or bad
But I know I love it so?

You’ve obviously never been a biker Tom, 'cos the order is usually the other way around.

'course I’ve been a biker. I still have an old Sting Ray, as a matter of fact. 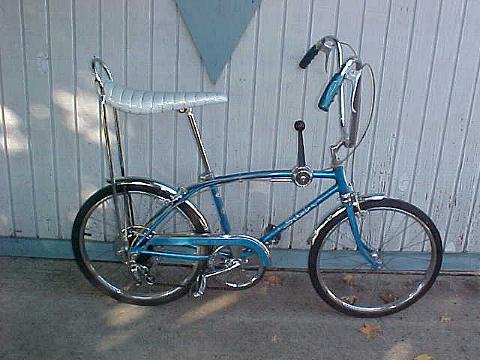 Actually, motorcycles scare the shit out of me, to be honest.

Well you could always do like Sting and be a Mod.

Sweet bike BTW, greatfor wheelies!
And the occasional hitcher, need some pegs on the back for that though…you should pimp it up! or would it loose it’s classic status?

I can’t see any death or speed metal on that though, maybe Molly Hatchet, or Iron Butterfly…

Molly Hatchet! Jeremy, I will never forgive you for reminding me of the errors of my youth…

I used to be what was called in the UK “a rocker”, i.e., a natural philosopher with a bike chain in his hands.

But, 8 pints of Special Brew in your gut, an open road stretching out before you as inviting as a beautiful virgin angel, and a souped up Honda 90… bliss!

But now: “Too old to Rock and Roll but too young to die” (and too drunk to kick-start the bastard without falling in a heap in the middle of the road!