I’ve been using nTrack on mobile for a couple of months and I find it fantastic.
Well done team.

I’d like to make a request for a feature which would enable user to control each individual drum separately, that is - at least with a separate EQ.

Goal is to have more control over the sound of each drum.

I imagine it as being able to press EQ button for each piece of drumkit and adjust the sound for the individual drum.
At the moment in sequencer there is a vol knob for each drum, which is great (btw the knob is quite small for a mobile device), but another button for EQ right beside it would be much appreciated.
Something like in the picture below: 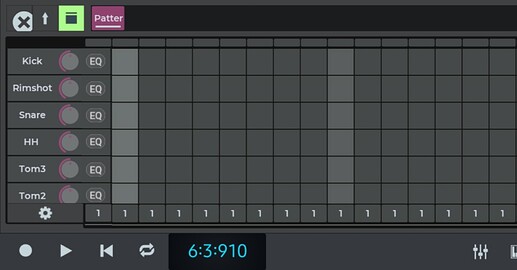 Or even better, in order to not clutter that small space by adding additional buttons (and to fix the problem of a small vol knob) what about one button which would open a single mixer strip for that particular drum? A strip that would allow a vol and pan change, EQ adjustment, add effect, etc. Precisely as it currently is allowed for tracks.
Something similar to this: 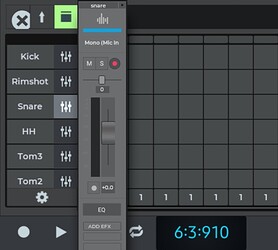 I’m sure the solution can be more elegant than the example above, but such a feature is VERY much needed.

Once implemented, I’m happy to pay for the product, and can even bring some friends along.

Hope to hear from you soon.

Or even better, in the sequencer there could be a button which would open a whole mixing rack (instead of just one mixer strip) for the whole drum kit.
Something similar to this: 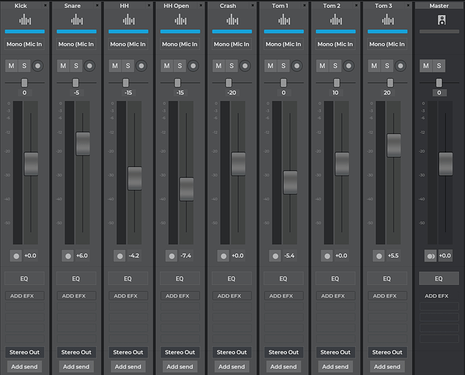 This would solve the problem of how and where to display the single strip.

The mixer idea (either one mixer strip opened for each drum separately, or a whole mixing rack opened for whole drum kit in sequencer) would be much better than only an EQ button, because ideally I’d like to be able to put effects on one drum only, or different effects on different drums, for example, echo on snare and reverb on kick only.