AN ICON OF THE IRAQ WAR
A picture of a young US Marine smoking a cigarette is quickly becoming the iconic image of the war in Iraq.
CBS news anchor Dan Rather has hailed the picture as the best photograph of the war.

hmm.... I've seen more representative photographs than that one. Doesn't look particularly symbolic to me. Dan Rather must not see many photos of the war.
CosmicCharlie November 16, 2004, 5:08am #3

I don’t know if Rather really made this comment but he knows alot about war - he covered Vietnam in great detail & was in the thick of it. That work led to him eventually becoming an anchor. 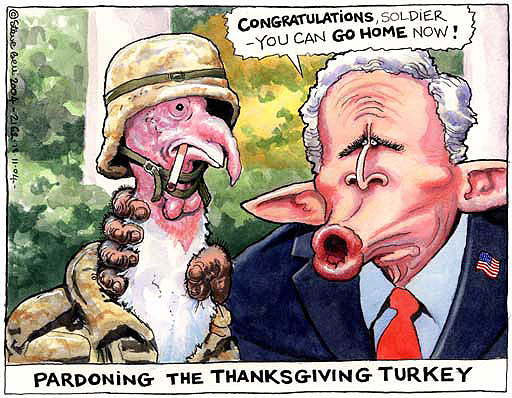 ...
On second thoughts, perhaps Miller does deserve to be elevated to the status of icon - not of the war in Iraq, but of the new era of supercharged American impunity. Because outside US borders, it is, of course, a different marine who has been awarded the prize as "the face of Falluja": the soldier captured on tape executing a wounded, unarmed prisoner in a mosque. Runners-up are a photograph of a two-year-old Fallujan in a hospital bed with one of his tiny legs blown off; a dead child lying in the street, clutching the headless body of an adult; and an emergency health clinic blasted to rubble.

Inside the US, these snapshots of a lawless occupation appeared only briefly, if they appeared at all. Yet Miller's icon status has endured, kept alive with human interest stories about fans sending cartons of Marlboros to Falluja, interviews with the marine's proud mother, and earnest discussions about whether smoking might reduce Miller's effectiveness as a fighting machine.

Impunity - the perception of being outside the law - has long been the hallmark of the Bush regime. What is alarming is that it appears to have deepened since the election, ushering in what can only be described as an orgy of impunity.In Iraq, US forces and their Iraqi surrogates are no longer bothering to conceal attacks on civilian targets and are openly eliminating anyone - doctors, clerics, journalists - who dares to count the bodies. At home, impunity has been made official policy with Bush's appointment of Alberto Gonzales as attorney general, the man who personally advised the president in his infamous "torture memo" that the Geneva conventions are "obsolete".
...
The real-world result of all the "strategic" thinking is the worst of both worlds: it didn't get Kerry elected and it sent a clear message to the people who were elected that they will pay no political price for committing war crimes. And this is Kerry's true gift to Bush: not just the presidency, but impunity. You can see it perhaps best of all in the Marlboro man in Falluja, and the surreal debates that swirl around him. Genuine impunity breeds a kind of delusional decadence, and this is its face: a nation bickering about smoking while Iraq burns.
Daniel_Smart November 26, 2004, 5:24pm #8

And one of the things with having a free press is having freedom to express extreme opinions - note this is ‘comment’ not newstory. You should check out the Daily Mail comment as well for the opposite view.

I’m not saying anything either way but the truth, I find, is usually somewhere in the middle. Of course on some occasions it’s nowhere in sight