Got my Genelecs, need to brag!

It’s been a while since I’ve written to the forum. The extra bedroom/office has been turned upside down
for a time, and my computer’s been tucked away.

…I’ve been building some shelves, and it took longer than I reckoned. The idea is to improve room acoustics
by covering most of one wall with books, folders, boxes and such. The room will be a combined guest room/studio. Anyhow, the project is nearing its end, so I’ve moved the computer back and also recently connected the broadband that had been idling unused since I got it installed. Just dumping the appropriate PCI-card and drivers into the PC actually worked out as it shoud this time.

Also, a few weeks ago, I got back a pair of vintage S30 studio monitors I had sent to the Genelec factory here in Finland for repairs. The speakers are active three-way, with ribbon tweeters. Today, I bought a pair of suitable cables and connected the monitors to the computer. The sound is really clean!
At first I thought maybe too clean and light on bass. But after listening to different recordings, it seems more like the the speakers just don’t shape the sound the way Hifi-speakers do. There is some emphasis on high mids and trebles, but this might just be something that my previous listening equipment has not been able to reveal. Previouisly, I’ve been mixing on a pair of AKG K271
´s and some home modest home stereo equipment. This is something else!

The S30 is an old design, my pair is about twenty years old. I got it from a friend, who had bought them from the national broadcasting company as surplus. Apparently, some less informed person had mixed up their inventories, so this particular pair is not matched, the faces of the speakers are not each others mirror images as they should be. I was a bit worried about possible problems in the stereo image, but I have not noticed any such as of yet. I guess with some careful positioning it will be OK, and I’ve gotta
do that anyway.

Next up is a proper mic, an USB-keyboard or modest synth and the Behringer fader controller. Some more furniture and speaker stands too. Then I’ll be about where I need to be. Just add talent… 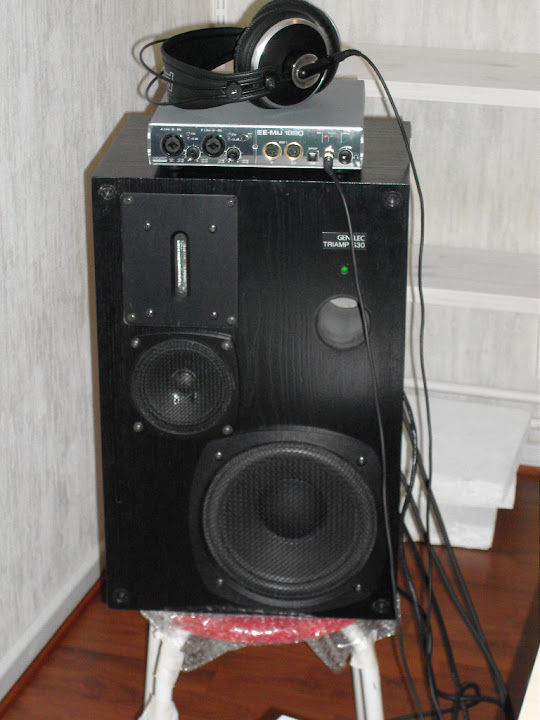 What happened to them that you had to ship them out for service?
Isn’t it strange how light the bottom end sounds on real audio monitors?

The bottom end is there…
just FLAT…

Trust me…
That’s all you need…

[EDIT] Give me a blind-man’s feel of those boxes… How heavy are they? in kgs…

How many quarters you have to put in the slot to get 'em to make noise?

How many quarters you have to put in the slot to get 'em to make noise?
Thats not a coin slot pop's that's a thermometer, anyone from the city can tell ya that!
What I'm wondein is what's he puttin a thermometer on a speaker box for?

- I’m guessing one weighs about 20 kg, double that for pounds. The weight and shape combined feels particularly cumbersome, perhaps making it feel heavier than it is.

- The edges of the woofers were cracked, and there was some problems with a tweeter as well. Along with the speakers came list of repairs, they replaced a bunch of electronic stuff. Heavy use, old components.

- It took some quarters actually:-) It
might have made more sense to buy a pair of Behringers, Samsons or whatever. But the professional history of these boxes had me convinced, if they were good enough for the radio, the sure are more than good enough for me.

- They are not spoiled with beauty, but that’s cool.

- Gotta try the soup can trick. I like soup.


Your boxes will leave a set of Behringers or Sampsons
in the dust… Sorry, to the guys who use them… BuT…


Me…
I use a set of Powered Two-Way Yorkie’s for Tracking, Editing, and Mixing and all…
They are O.K.
They are what I’m used to using after I smoked my Tannoy PBM-6.5’s outta the water…
I fixed them…
but they’re not Tannoys…
anymore…

I just received a set of JBL D/E-120 cone replacement assemblies
to repair the Mid Cabinets of the main repro setup I have the the studio I'm working on building..
They were much more that I had planned to spend on repairing these speakers..
but I will be satisfied with the final outlay of energy and cost when they are fixed..
I need to update the studio-and-photo blog..
I'm ready to re-cone these speakers..
I just need some glue solvent..
then I'm ready to get busy..

- What are those links under your signature, let's see...
Damn. That studio looks serious. In a good way.

- Be sure to post a pic or two from your new set-up when you're done!

Sorry…
I’m slow to reply to your questions…


Those links are so out-dated
it hurts..
That setup is mostly gone now..
The Studio blog showing the setup I'm moving to is This one..
Studio Under construction..

Then there's the text of how I describe it's progress..
You'll find it up here somewhere on the Board..

Today I spent a couple of frustrating hours feeding test signals to the pair of S30
´s. I noticed one monitor sounding quieter than the other. Turns out
the midrange was dead, as in silent. I tried different cables and that did nothing.
Then it suddenly started to work again, when
I had my ear next to the cone of course... luckily I had sense enough to turn the volume down a bit before that:-)I was covering the treble ribbon with my hand, since some of the signal was going there, and in the process of doing so I might have given the speaker
a small nudge. So I'm guessing there is a loose connection somewhere.

Oh, joy. Well, hopefully this is a glitch.

I love OLD GEAR…
I believe I’m stuck back in the late '60’s to the early '80’s…
The only thing about old stuff is…
if you don’t fix stuff yourself and you are unable to find someone that is interested in maintaining this stuff, you just chase good money after bad…
Believe me…
there was junk made back then…
but… if you can’t fix the stuff that you consider is not junk that’s exactly what you got>>>
Junk…
And I got plenty of it…

[EDIT]
I was gonna offer you a deal you can’t refuse…
I almost forgot…
I’ll trade you some of my OLD JUNK for your beautiful S-30’s,

or something…
Whatta think

Hi, I:-T. Have you opened it up yet? I wouldn’t be able to resist:-)
I’m guessing a loose connection.

but.. if you can't fix the stuff that you consider is not junk that's exactly what you got>>>
Junk..
And I got plenty of it..

[EDIT]
I was gonna offer you a deal you can't refuse..
I almost forgot..
I'll trade you some of my OLD JUNK for your beautiful S-30's,,

or something..
Whatta think


- I like old stuff, as well. It might because old stuff eco-friendly, or because it's got character. But a lot of it has to do with me being conditioned to second-hand stuff during my days as a poor student. Hey, less money on junk meant more money for beer! But the condo is rather small so I'm going for a minimalistic approach, that mixing desk just wont fit:-)

- I took a look inside the speakers before I sent them to the factory. There is a
big ol' PCB in there, I wont even touch that as long as the problems don't reappear!

- What do you guys use for speaker stands? For my humble hifi I
made some stands a few years back out of poured concrete, reinforced with a rifled (?) steel bar in the middle.
The concrete vibrates to a surprising degree, I guess its too dense to provide proper isolation. Colors the sound somewhat, but on the other hand, the stands are handy for breaking down doors or doing free-weight exercises:-) Sand-filled stands for the studio?

Of course, there are other attributes to consider when saying that…
I’m still learning…
Big Time…

I believe…
BUT…
can really resonate a room…
a negative attribute…

We are backwards up here … anyway…

is that what it’s called…

Get back to work EH ?