let us have a moment of silence. 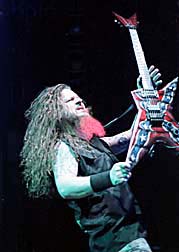 no, let us have a moment of balls to the wall kick ya in the nuts guitar.

Dude, that was just down the street from me. Talk about creepy. It is a huge story here in town. SOme of the guys were talking about it that some club got shot up last night and I pulled up the local news web site. I figured it could be folks I knew. My jaw dropped when I saw it was Dimebag, not so much that I was a big fan, but it was someone known. Sheesh, what’s wrong with people.

ok, but who the #### is he? He was in some band called Pantera and now this Damaged Plan? Is he famous? Should I know him?

What a bad incident! wow.

Yup, if you were into metal in the 90s, Pantera was a pretty big name. Not something you would find on top 40 radio, but in the meatl community, he was known. He had his own signature guitars (Washburn and Dean) and amps (Randall), so if you ran in that circle, you knew him either through the music or through magazine ads for gear at the very least.

I went to msnbc.com to do a search and found it was on the front page. I didn’t know who he was and never got around to listening to Pantera, but this just sucks. Metal detectors anyone? Sounds like a mega security screwup to me.

Although I’m not a big metal fan, I am a guitarist (hack) and do respect Dime for the skills he had. He was a shredder extraordinaire and had a big, biting tone that I always thought just came from his hands and technique. Many try to duplicate the “Dime” sound by using his signature equipment but always come up short. A big loss for sure.

He’s one of the reasons I picked up guitar in the first place. This is a guy that at 16 had already won every guitar competition in Texas. I don’t think there’s a metal guitarist out there that doesn’t claim some influence from him.

How fucked up is that?

My Pantera CD got flogged a couple of years ago in a burg, and just got around to replacing it 2nd hand. Saw them come out here, learnt a few of their songs, and he could PLAY.

Huge influence on me.

I never idolized Dimebag or anything but he could definitely play. Great guitar tone too - very heavy.

He’ll be missed in a lot of circles…

I feel sorry for the guitarist and not to disrespect the band or the deceased, but doesn’t this music elicit (at worst) or condone (at best) this violent behavior??? I mean is some of this music all about violence, etc?

Sure a lot of their songs were aggressive, but they wrote about a lot of things anger, love, heartbreak, political stuff - there’s a lot more to metal than meets the eye. It runs the full gamut of emotions.

“NO GOOD (ATTACK THE RADICAL)

Race, pride, prejudice
Black man, white man
No stand
Live in the past
We make it last
a hated mass
No solution
Mind pollution
For revolution

You blame oppression and play the role of criminals
To rape and burn show progress is minimal
White hoods and militants you know it’s such a pity
Living, breathing
Violence in your city

If one man
Had one home
In one world
Held live alone without variety
Full of anxiety
No one to point at, question
Or even talk to – in his private grave
No matter what color
He wouldn’t be saved from ####
He dwells
a closed mind playing the part of prison cells”

You got that right. Maybe the whole thing was staged & dimebag isn’t really dead???

Sorry, I’m not going to defend their lyrics, they’re entitled to their own opinions.

No matter the lyrical content or the aggressive sound, it doesn’t excuse or even really explain what happened. This is just some nuthead guy losing the plot and taking things way too far. I never dug Pantera that much but it was always obvious they were grade-A metal, right up there, and the guitar was a huge part of their quality. Dimebag has been a feature of the scene for a long time and in no way a negative one. RIP.

I’ve always been a big fan of Pantera (but also dig everything from classical, jazz, metal, prog rock etc…). They absolutely breathed life back into a ‘haired out’ dying metal scene by stepping it up a notch, and mostly due to Dime’s playing…AND continued to put out amazing stuff (that was still with-the-times) until they broke up a couple years ago.

It’s really good to see posts like ‘I’m not a fan of Pantera or DamagePlan, but as a guitarist can respect his playing alot’. I mean, I really don’t like country music, but I’ve seen some live perfomances on tv where I wound up watching the whole thing by being enthralled with the guitar work.

He was truely a great player, and from what friends of mine that have met him say, a really really nice guy. He will be missed.

I never listened to Pantera or really even knew who Dimebag was until this. However, it is always a shame when stuff like this happens. I say let’s avoid turning this into a shouting match over the harmful effects of violent content. Or at least move it to a NEW thread in the “General Disscusion” section intead of highjacking this one. Oh, and read the addendum on Sex and Violence inthis book for a good discussion of this topic. It is related to movies, but still really enlightening. Just 'cause it’s a Christian book doesn’t mean it is going to say what you think, btw.

I must admit, I find it rather amusing that someone who is concerned about violent content has an avatar of a rotting fish cadaver…

I actually NOT concerned about violent content that much. Read the chapter of that book. You’ll understand. Or, take this convo to the General Discussion section, and I might talk about it there.